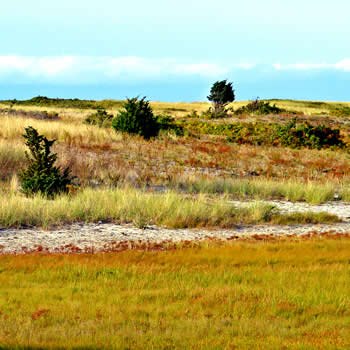 Climate change is projected to lead to changes to habitat, both on land and in the water.

Salt marshes and other wetlands are common along the coast of Martha’s Vineyard and throughout our ponds. These are very important environments because they provide habitat to many different organisms including all levels of the food chain. Tides, wave energy, and sediment deposit are directly affected by wetlands; during storms the wetland takes some impact from flooding and erosion.

If unconstrained, marsh and other wetlands would thrive in the environment that will be produced with the modeled climate change. Marsh can easily migrate to areas that are conducive to their needs and wetlands are a tough ecosystem where gasses and excess nutrient deposits will not harm the growth and development of the wetlands.

However, wetland migration can be hampered by the presence of walls and other man-made barriers. Also, if the sea level rises too fast, the wetlands may not have enough time to migrate. If a wetland cannot migrate further inland it will have to quickly grow vertically with the rising sea levels to prevent from drowning. Monitoring of wetlands is necessary to know if this growth is possible, if not the wetlands will die.

The MVC has mapped existing wetlands in six Island ponds (Black Point Pond, Chilmark Pond, Menemsha Pond, Farm Pond, Sengekontacket Pond and Poucha Pond) and looked at whether or not they have room to migrate. A working group with made up of representatives of the conservation commissions of all six Island towns is looking at possible mitigation measures and how changes to wetlands can be monitored.