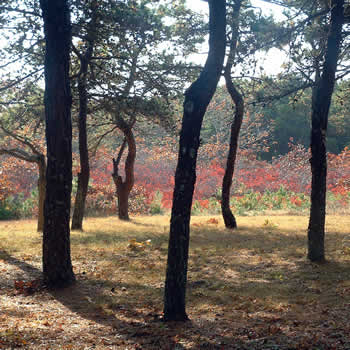 The Vineyard’s overall character is defined largely by its natural environment. Even the casual visitor recognizes the evocative beauty and authenticity of the Island’s landscapes and vistas. The word “character” can mean many different things. Here it focuses primarily on scenic values, the visibility of the Vineyard’s natural environment, especially from public places such as roadside and coastal views and vistas. This visual access contributes to the community’s appreciation and stewardship of natural areas.

In his landmark 1973 Looking at the Vineyard, sponsored by the Vineyard Open Land Foundation, respected urban designer Kevin Lynch advanced the notion that the Vineyard could accommodate a considerable amount of development without destroying the Island's traditional character, provided this development was kept out of sight. In 2005, the MVC conducted a Visual Preference Survey that showed that about half of the public’s favorite images were of nature, of which people chose farms and rural fields as particularly important in defining Vineyard natural character and people wanted to maintain ocean vistas and viewsheds, and use rural-style roadside treatments such as maintaining overhead tree canopies, preferring split-rail over stockade fences, and preferring wooden rather than steel guardrails.

People’s sense of the Vineyard comes largely from what they see as they drive along the Vineyard’s roads.

Also of concern is the view from public waters, especially the ponds and ocean. There is concern that development highly visible from the water is undermining the natural character of the Island.

In general, the Island Plan proposed to preserve the appearance of openness and great space; to foster the maintenance of existing vistas and the creation of new vistas, as well as the restoration of vistas that have been lost over time from plant succession; to match the use of land to the land’s natural and visual qualities; to manage change and growth to enhance the traditional and natural landscapes of the Vineyard, and to require that development plans fit the scale and quality of the inherited landscape so that generations to come will have views and open vistas to enjoy.

MVC Actions: The first two Districts of Critical Planning Concern created by the MVC in 1975 were the Island Roads District and the Coastal District, both of which restrict development in those areas where it would have the greatest visual impact. The Island Road DCPC protects Major Roads in all six towns with special regulations including height and setback restrictions, protections for stone walls, and requirements to bury power lines. Regulations for the Special Ways, in five towns, include restrictions on paving and widening. The tremendous housing growth since then is generally shielded from public view due to the regulation separating driveway entrances by 1,000 feet. Currently, the MVC is facilitating a Scenic Roads Initiative working on measures to protect the scenic character of the Island roads.