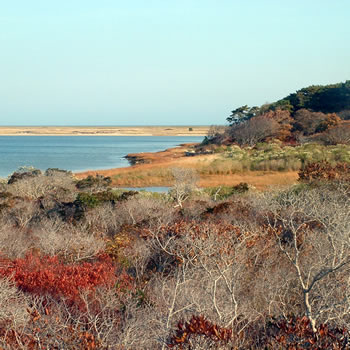 Biodiversity, the variety of species, is important to the health of any ecosystem, and of particular concern in some unique and vulnerable areas. About 65% of the Island (37,225 acres) has been designated by the Commonwealth as Priority Habitat for rare and endangered species of plants and animals. Several complex ecosystems form the heart of the Island’s natural environment.

Sandplains: One such special area is the Sandplains, an ecosystem that is extremely rare in the world. The Sandplains are a mosaic of habitats ranging from oak and pine barrens to heathland, scrub oak frost bottoms, maritime thickets, and – perhaps the most well-known – grasslands. Sandplain Grassland is an open field community that developed on outwash plains created at the end of the Ice Age. This ecosystem developed only on the outwash plains adjacent to that ice front, namely on Martha’s Vineyard, Nantucket, Cape Cod, Block Island and Long Island. The Sandplains are naturally stressed: droughty, acidic soils, subject to frequent fire, exposed to wind and salt spray over large areas. Even here, grasslands tend to be overtaken by shrub and forest growth in the absence of fires that historically kept the fields open, so this system is particularly vulnerable to the fire suppression that comes with human habitation.

Threats: Overall, biodiversity is threatened by development as well as by inappropriate management practices such as habitat fragmentation, fire suppression, introduction of non-native landscapes, and the spread of invasive species. Each particular system is more or less vulnerable to each of these impacts.

The Vineyard’s Five Eco-Regions: The Island Plan identified five EcoRegions on Martha’s Vineyard the minimum viable landscape areas which should be protected and restored to preserve the Island’s biodiversity, namely: the Central Sandplain, the Coastal Sandplain, the Western Moraine, Aquinnah, and the Eastern Moraine. The aim in these areas is to protect the remaining areas of native vegetation and to restore these areas to ecological health.