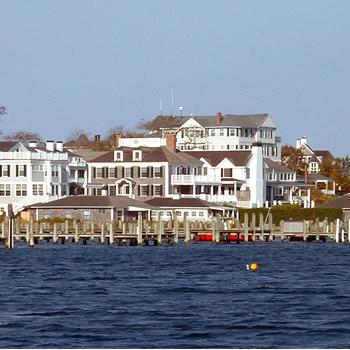 The fact that, throughout the 20th century, Martha's Vineyard continued to use mostly traditional local forms and materials has resulted in a cohesive built environment that sets the whole Island apart from the rest of America, with its cookie-cutter suburban sprawl and its “Anywhere USA” strip commercial development.

Recent construction usually follows traditional local forms – typically a combination of several simple building volumes with steeply sloping roofs – and materials – typically white siding in some towns, cedar shingles elsewhere – though there are some newer buildings, especially in suburbs, whose size, style, and materials are not in the Vineyard tradition.

This Character is Threatened

Several factors now threaten this built environment. Skyrocketing real estate costs lead some people to maximize use of their property by demolishing older structures and erecting buildings that go to the limits of zoning regulations, that are too big or otherwise don’t fit their surroundings, or that are not environmentally sound. This is exacerbated by a growth in the number of people with few ties to the Vineyard who buy properties and hire architects or builders from different parts of the country whose designs have little relation to the Vineyard tradition or context. A few poorly designed buildings in highly visible locations could seriously undermine the Island’s character.

The preservation of the 5 percent of the Island that can be classified as historic is discussed in the next section. Almost as important is the challenge of retaining the Vineyard’s character in the other 95 percent of the Island. This is especially important as seen from major public roads and vistas, and from public waters – ponds and the ocean.

For example, under current zoning, about 540 buildings could be erected only slightly set back from the Island’s scenic roads, and there is nothing to prevent owners of these, or existing, buildings from removing the vegetation that now lines these rural roads and provides vegetative screening. The result would transform the country part of the Island into what would appear to be a densely built suburb.

In recent years there has also been increasing community concern about the construction of new buildings that are so large that they overwhelm their neighborhood.

We want to avoid a free-for-all where inappropriate new construction is allowed to undermine Island character and to negatively impact quality of life and property values.

What We Can Do

The Island Plan suggested that new buildings should harmonize with their neighborhoods or natural settings, and minimize any negative impacts on Island character and on abutters, without unnecessarily inhibiting the flexibility and creativity of owners and project designers.
The Island Plan proposed to “ensure that new buildings fit their context by tailoring zoning to reflect each neighborhood’s characteristics and by extending design review to all historic areas and traditional neighborhoods”, while allowing for individual creativity, with a proactive, three-part approach: